Geez, it's been forever since I've posted here.  Maybe I'll use my blog to tell you about my latest project adventure.

I've been working for a while on an enclosure for a raspberry pi that will allow me to use my jog dial interface that I've built for my ShapeOko 2.  I call it the "ShuttleBOX".  I wanted to have a nice aluminum panel on the front.  So, first I designed something that looks like this: I thought that was pretty cool, and even though I hadn't ever cut aluminum on my ShapeOko2, I've seen others do it, so I figured I would use this as a learning experience.  However, the problem was with that text.  How would I get into the corners of that tiny text?  I have some really tiny bits for use on PCB milling, but I just knew that if I tried that, I would go through a ton of bits with them snapping like twigs.

So, I investigated other options.  Some folks use acid etching to etch in their designs.  Others mask an area and then paint.  None of that appealed to me.  I also designed the panel using Front Panel Express to see if they could make it for me.  That software is great, but running it through the estimator, it was going to be over $70 for them to make.  That's too steep for me.

But then I ran across some photo printing sites that were offering new services that print on aluminum.  I checked it out, and some of them were quite affordable!  If I could get all the text printed on the aluminum, all I would have to do it cut out the holes to mount equipment and the edge profile.

I looked more into the "Metal Prints" at BayPhoto.  For a 4" x 6" print, I could get it for about $11.  Not too bad!  And reading their material, they claim: "Because the image is infused into the surface and not on it, your images will take on an almost magical luminescence."  Oooh.  Magical!  Who wouldn't want that?

I downloaded their software and started exporting my design into it.  I made an image fit exactly their print size since their software is not exactly set up for sizing things exactly.  Meaning, I can't position a drilled hole at some exact location - their software is more commonly used by people panning and zooming images by hand until they get the look they want.  Once I had my image in there I realized something - if they can print anything, why am I just putting text?  I could add a fancy background!  So, I did: I submitted the order, and after a week or so, some great prints showed up.  I decided I would make my first attempt at cutting aluminum on one of these, so I picked the finish I liked the least.  Surprisingly, I didn't have a single issue cutting the aluminum.  I used some WD-40 as some cutting fluid and things went just fine.  Here's a video showing some of the cutting at work: 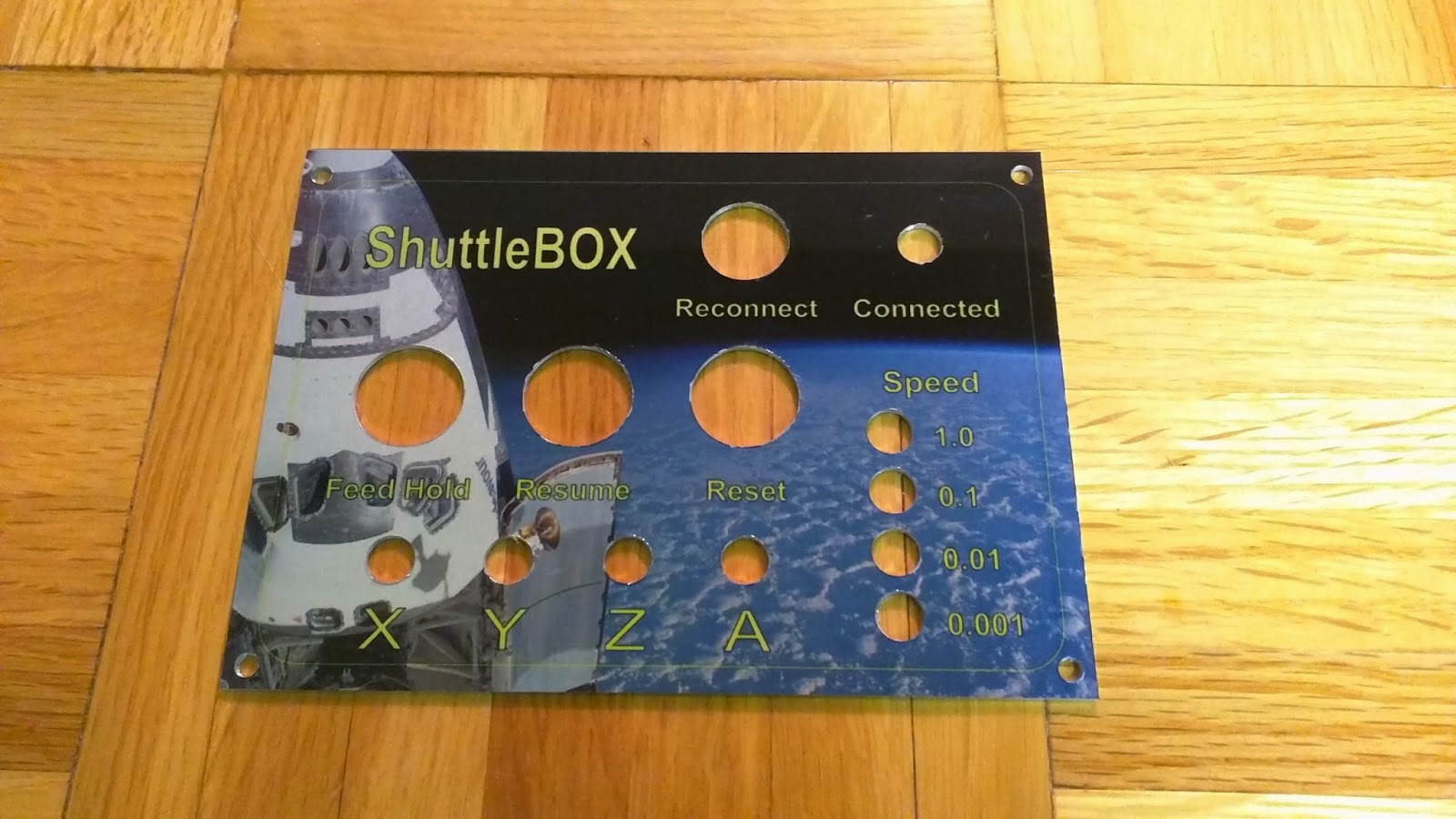 I added my nice metal buttons (I'm still missing one at the top) and I think it came out quite nice.  Although, this was the print finish I liked the least (so I have 4 more better looking prints still here).  Also, if I did it over again, I would lower the saturation on the background image to be a more washed out white so that the text stands out more.  Oh well, live and learn.  I still think this looks pretty great: I did some searching and didn't really find folks doing something like this. And I'm not sure how new this whole "metal prints" for photos thing really is.  But I think it worked out great.  Thanks Bay Photo!

P.S. - In case you're interested, I plan on posting the plans for the enclosure to Thingiverse at some point, but I'm still iterating on the design.
Posted by Frankie at 9:15 PM
Email ThisBlogThis!Share to TwitterShare to FacebookShare to Pinterest

How thick is the aluminum?

I emailed them and they specified it as approximately 0.045” thick. So, I think I milled mine to 1.2 mm and it worked out great. But I think I saw somewhere an option for you to supply your own materials for them to print on. Not sure how that works.

Thank you for sharing! Superb job

It was a nice work. Build panels is not an easy task when you think in quantity and/or customization. I know this from my own experience while developing a custom panel designer (panels.mwf-services.com).